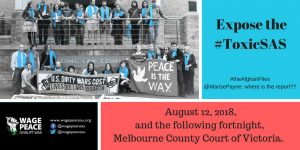 Australia is a country that calls itself an open and accountable democracy. We aim to show other countries how to act in a humane way to their citizens. So I was appalled to hear from a friend about events in September 2014.  Protesters were hooded, zip-tied and  had their clothing cut from their body. They were then beaten and threatened with rape and drowning at the secretive SAS military base at Swan Island, Victoria. Apparently a 2015 defence report admits this.

I note that the mission for the Australian Defence Forces is just that- the defence of Australia from armed attack. Yet in recent years we have strayed from this mission to support foreign countries in their wars against some of the poorest nations in the world.

I am concerned that the more brutal culture of US forces has contaminated our military. If this is the treatment given to Australians, how are the military behaving to people caught in the centre of armed conflict?

I call upon you to restore Australian’s reputation by fighting this culture of abuse. Transparency and taking responsibility for the terrible events at Swan island at the current court case concerning the protesters’ violent ordeal would be a start.

Please also support the next Chief of Defence Angus Campbell  to continue his work addressing the culture of abuse.  Angus Campbell knows that for the mental health of his soldiers he must demand open discussion.

Support is needed to fight drug addict and post traumatic stress disorder. And a rethink of the foreign policies that are sacrificing our ideals, our soldiers’ mental and physical health- and even their lives – for tenuous wars that result in the slaughter and suffering of so many of our fellow human beings.

I would be very interested in hearing your views on this matter.

A letter from Sarah Isaacs regarding #ToxicSAS