I spoke today at a street rally at the UK High Commission , Commonwealth Avenue, Canberra , at 12 noon Friday 26 April, for Julian Assange . Here are my speaking notes as delivered: 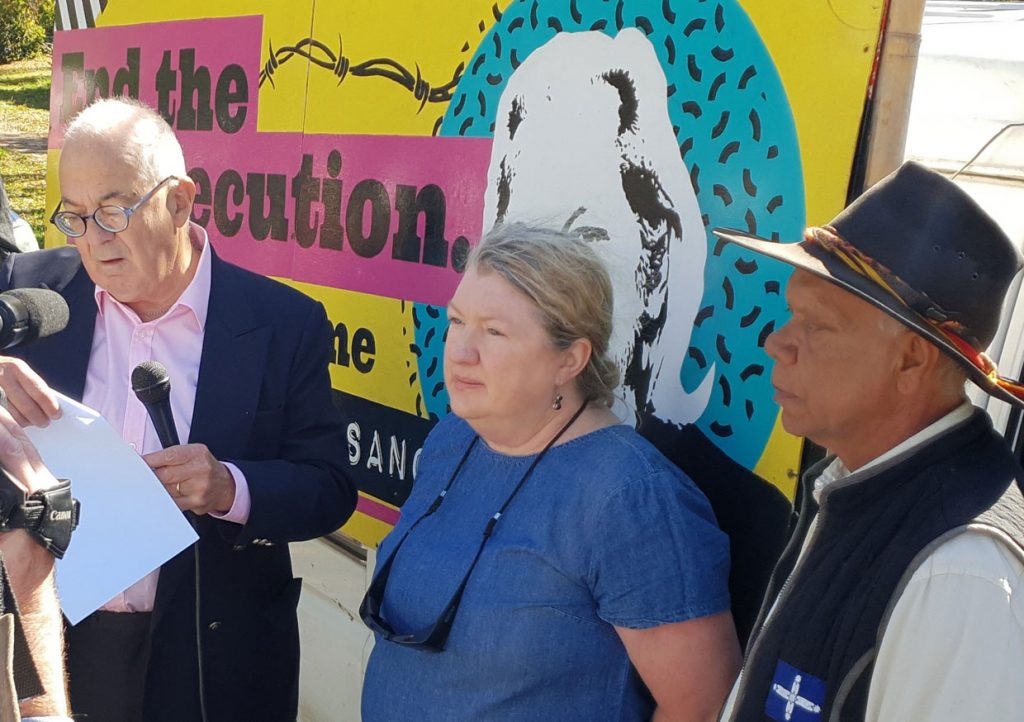 My thanks to Christine Assange, Julian’s mother in Australia, to Lorese Vera, and to their colleagues, for inspiring and calling this public meeting.

We live in dangerous times. US imperial power is flailing around in its death throes , making trouble for people and nations all over the world. Blocking real action on climate change, trying to foment regime change in Venezuela and Iran, troublemaking in the South China Sea, illegally maintaining military presences in Syria. The US governing elite remains obsessively Russophobic. The nuclear arms race is slipping out of control under dangerous American illusions of global military supremacy. We are living through the most perilous moment since the Cuban missile crisis ; more perilous even, since in the craziness of Russiagate, the US government is not currently even speaking to Russia.

And here in Australia we have a crucially important election underway, whose outcome will be vital to our young people and other disadvantaged communities.

So why bother about this person called Julian Assange ? This one weird early middle-aged guy who seems to have a knack for getting up the noses of so many powerful people and governments? Aren’t there bigger things we need to think about than the fate of this one particularly troublesome person? Should we not just think of him as ‘collateral damage’ of the past 20 years, and move on to more important and current debates and causes?

The fact that some of us are here today for this demonstration, in a city not big on demonstrations, shows we do not accept that argument. We recognise that Julian is pivotal to so much that is happening around us.

In these dangerous times , we need to gather round him to protect him from his bitter enemies. Not just because it is the decent thing to do – and it is – but because our country needs him, his idealism and energy and political insights . People like Julian are rare and we need to give them our love and respect and loyalty and protection.

There is nothing I say here today that you won’t recognise and know already. Ideas and arguments flow freely round the internet, it is easy to find likeminded people on Facebook and Twitter, to read and commend and encourage one another’s work. We all know Julian’s importance – that is why we are here.

We are gathered together just down the hill from our Parliament House where Australian national security policy is debated and determined . The fact that we have come together in this place today, in an act of real physical politics, sends an important message to our power elites. We want to make them uncomfortable, we want to be the burrs in their saddles. If we do that, we are achieving something here today.

Julian is now in great danger. He faces extradition from Britain to the heartland of the American Empire. They want to silence him, to bury him in US prison for the rest of his life as they wanted to bury Chelsea Manning for 35 years, a sentence only commuted by Obama in an act of decency as he left office, to nine years. As now Manning is indefinitely back in jail again – she is a truly heroic person.

The current US effort to extradite Julian, now exposed after years of denial, is an act of pure vengeance and spite, and intended to intimidate others who might be tempted to follow Julian’s and Chelsea’s noble examples.

It is what apartheid South Africa did to Nelson Mandela. They failed to suppress his thought and nobility, and these people will fail too. Around the world, people are rising up in protest at the cruel political persecutions now being inflicted on Julian and Chelsea.

The US and UK secret states are throwing everything they can at Julian now. The full resources of Anglo-American information warfare , of the most malevolent PSYOPS – psychological operations in warfare – have been deployed against this one man.

Caitlin Johnstone, whose website I urge you all to follow if you do not do so already, recently brilliantly listed and analysed 27 – twenty-seven – Big Lies that are being spread about Julian , in their efforts to discredit him and limit the reach of his voice. Caitlin convincingly rebutted each of those 27 lies. After today’s event, please go back and read her piece.

It all boils down to a simple either-or proposition : either Julian is crazy and dangerous and must be locked up for life , or those out to get him are committing evil acts . There can be no sitting on the fence on this one, no careful balancing of pros and cons on each side.

We are talking about an innocent man’s life and about the attempt by malign state forces to silence this great man’s voice.

Assange started with the idea that raw state power can and must be fought and exposed with truth and public opinion: that we must demand our governments behave decently, especially when they go to war . This is the same ideal that inspired Dan Ellsberg to leak the Pentagon papers during the Vietnam War , Woodward and Bernstein to expose Nixon’s Watergate crimes, Ed Snowden to expose illegal US Govt intelligence-gathering on its own citizens, and Julian Assange to expose, especially, American war crimes in Iraq and Afghanistan.

Nothing better shows the crucial importance of what Assange and Manning did than the release by Wikileaks of the 18 minute film Collateral Murder, the full video and audio record of a mass murder of civilians carried out by a US military helicopter over Baghdad. Not only did they murder a large group of unarmed innocent civilians in the street, a few minutes later they blew up an ambulance team in a bus that came to collect the bodies and a few people still alive, a bus that even contained children. And they enjoyed themselves, they congratulated themselves on their marksmanship, they gloried in these cruel murders .

None of these war criminals were ever bought to justice , nor ever will be. The video was suppressed until Manning somehow got it out to Wikileaks. This was whistleblowing in the public interest of the highest order. If Wikileaks had done nothing else , this film proved its vital importance.

Wikileaks has opened the gates to a whole new way of challenging the imperial state and its false propaganda. There is a healthy public scepticism out there now . Lies are being and will be challenged and exposed. Julian and his team showed the way to the heroism of our own Witness K and Bernard Collaery in this city, over the Australian Government’s illegal spying during an important negotiation with the East Timor government, a case with which you will all be familiar.

Mainstream media are more and more being forced to account for themselves, to look critically at their own role in normalising and explaining away state misconduct . People like us, however angry we might make people like Chris Uhlmann and Michael Rowland – and I like and respect them both as good mainstream journalists – have an essential role to play in holding a blowtorch to the feet of power , and to those who surround and protect and normalise power.

Finally, what message can we send today to help Julian? We wish he were here, in this little piece of British territory across the road called the UK High Commission. We wish we could go in there and bring him out to freedom, as British police brutally dragged him out of another Embassy to a different kind of jail, a British prison in London.

But we can send a powerful message . We need to demand of the British government – and I hope people are listening to us in there – these things.( and I have sent them a copy of these words) .

All these things are basic human rights due to any Australian citizen imprisoned in a foreign country. Our government needs to demand these things, as it did for James Ricketson in Cambodia, for Peter Greste in Egypt, for our footballer in Thailand – but did not do for David Hicks and Mamdouh Habib In the US, and until recent days was not doing for Julian. We need to challenge the complacent assumption of our government, Labor opposition and the mainstream media, that bad stuff cannot be done to Australian citizens by the governments of our great and powerful friends Britain and the US . It can be, and it is.

Secondly , and crucially, we need to demand of our political elites – in this case, foreign minister Marise Payne and her Shadow Penny Wong, and behind them the major party leaders Scott Morrison and Bill Shorten – that they strenuously and forcefully demand of the British Govt that it not allow Julian to be extradited to US. We all know what will happen to him there. We see what is done to political prisoners of conscience Chelsea Manning, and Maria Butina. We cannot allow this to happen to Julian, to become a lifetime political prisoner of conscience in a US jail.

We need to demand of Marise Payne and Penny Wong that they publicly and jointly or separately commit to making the strongest representations to the British Govt to bring Julian safely home to Australia after his bail issue is legally concluded in the UK. His extradition to US must be firmly denied , because it is entirely vindictive and political exemplary punishment. We cannot trust American justice in this matter. We must protect Julian now, so that he can return to safety and resumed public interest work in his home country, Australia.

We are proud of our fellow Australian and we must now stand by him in his hour of greatest need. Thank you. 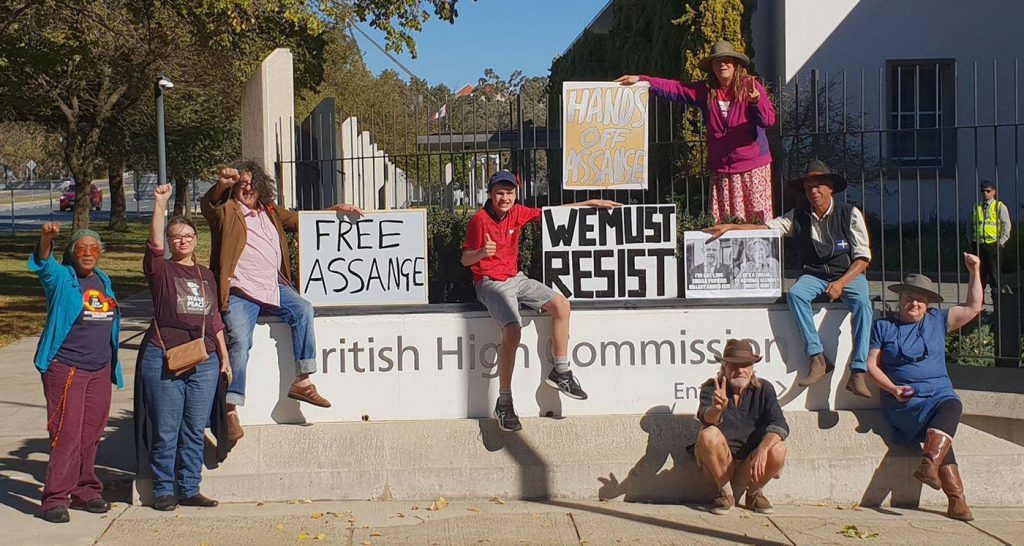 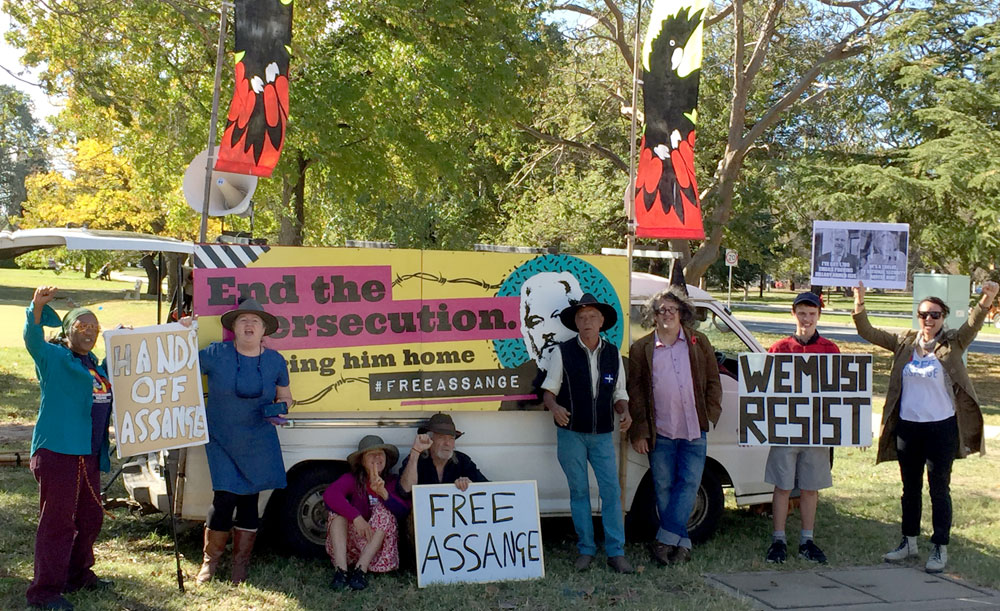 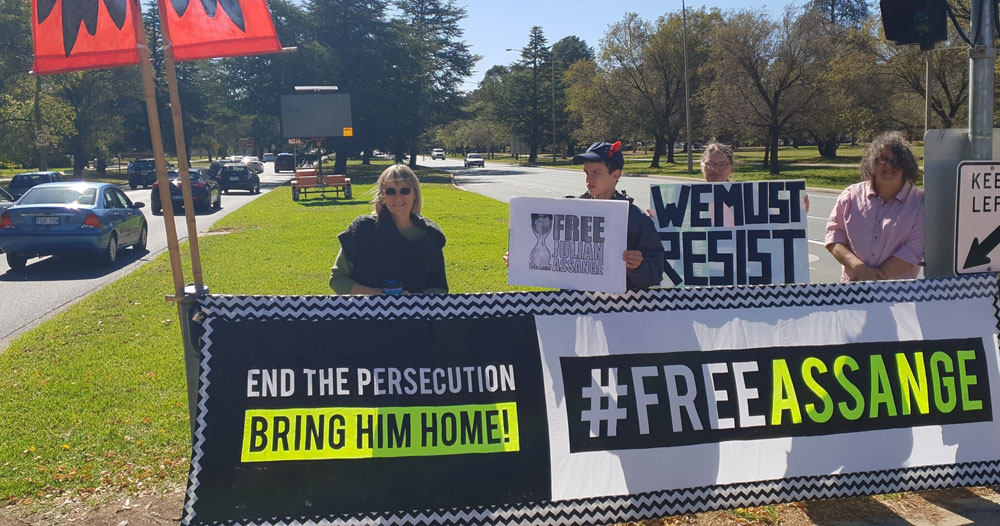 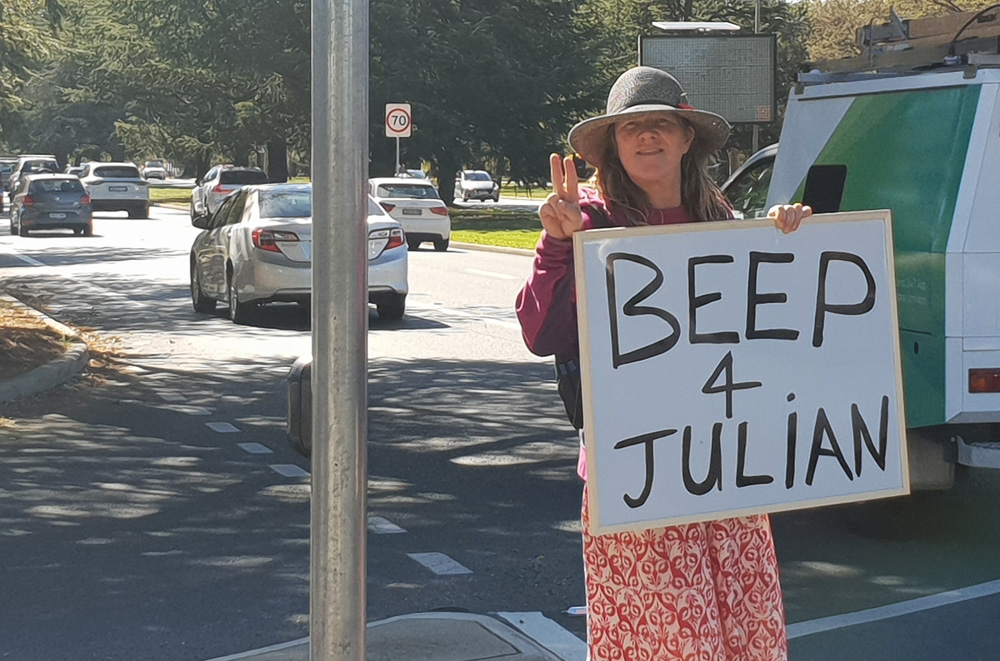