The Asia Pacific region is undergoing major growth in defence and aviation, with budgets in many countries continuing to rise and an ever increasing level of sophistication in technologies, equipment, systems and operational methods.

So goes the promotion from the Avalon International Aerospace and Defence Exposition, “the biggest aviation, aerospace and defence exposition in the southern hemisphere”. The event is currently underway in Geelong, Victoria.

Behind the friendly business talk, recent reports show us what those “growing markets” really mean – selling weapons to Saudi Arabia for use in Yemen’s horrific civil war. Or selling weapons to Indonesia, a country whose military routinely uses violence to break up unarmed protests. 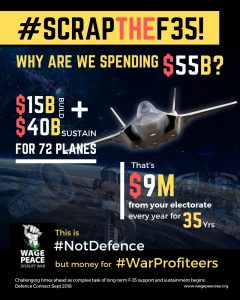 As ever with the military industrial complex, we find the real human cost is buried beneath layers of euphemism and obfuscation. Avalon is about a family-friendly air show, with the huge arms expo just a sideshow to military jets doing tricks. The expo itself, like the Australian government’s grand plan to become one of the world’s top ten weapons manufacturers, is purely about business – where growth is always good. Even when it means more weapons sold to more places to be used for more conflict.

Of course, the human cost of the arms industry is not only found in faraway places and civil wars we can never quite comprehend. Australia is not only an arms exporter but also an importer – something of which the Avalon air show reminds us.

There among the planes for our entertainment are the F-35 Joint Strike-Fighters – the war planes Australia has committed to paying $20 billion upfront and then an unknown amount beyond that for. The F-35’s were the most expensive weapons system ever produced and have variously been described as “flying lemons”, “jackass of all trades”, and by the US-military aligned RAND Corporation a plane that “can’t turn, can’t climb, can’t run.” Independent military and policy think tank Air Power Australia told a senate enquiry the plan to purchase the planes “has all the hallmarks of a Ponzi scheme“. Of course part of the reason the planes were bought anyway is Australia’s obligation to our strategic partner the United States to help cover the immense costs of the disastrous project.

The money spent on the F-35s translates as $9m per electorate per year – money that could be spent on services that directly improve the lives of ordinary Australians. Not to mention the immense carbon cost of flying round a military jet which, in the event of an actual air war, would be essentially useless.

The military industrial complex rides on the glamorous mythology of war and our fear of potential invasion (everything is always labelled “defence”, even an arms fair selling weapons to two countries hostile to each other). The reality is the arms industry manages to gouge huge amounts of taxpayer money to enrich a few corporations at the expense of the people who will one day be in the crosshairs of those state of the art weapons. For the sake of a safer, more just and more sustainable world; we need to see through the rhetoric of the arms industry and take action that will redirect that money into channels that benefit all of us. 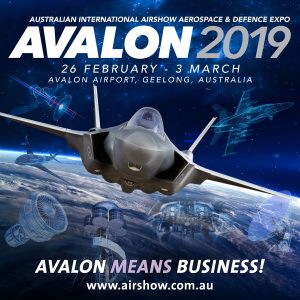 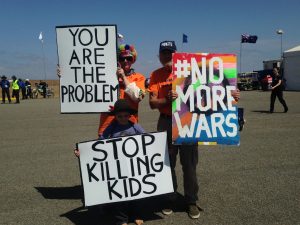 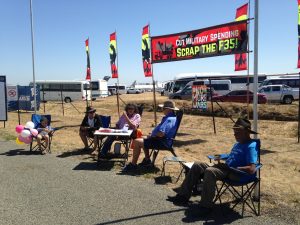 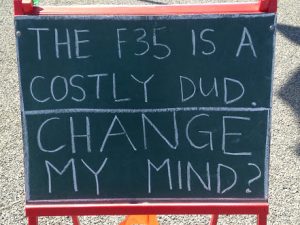