Higher hi-tech will not provide security

Following the publication of a book about our resistance at the US Pine Gap military base, Brisbane’s Peace Pilgrims, have played a renewed and enraged lament – this time at Boeing Defence Brisbane. We addressed Boeing’s workers who are creating a weaponised drone here in Brisbane. It complements their ‘Aircraft for #WarCrimes’ suite. 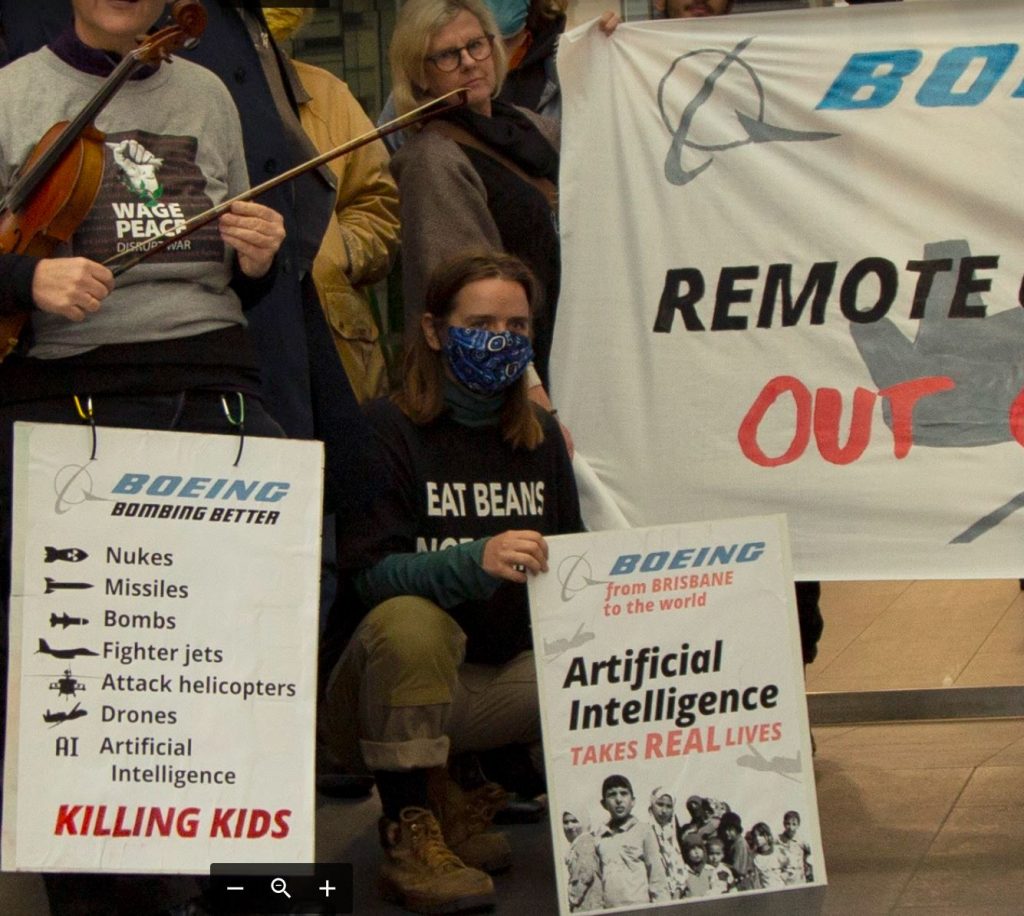 When a company profits from war and violence, it is in their interest to pressure for more war. We can assume Boeing is in the ministers’ offices via the Covid ‘recovery’ team making sure they get their chomp.

We already know that the current head of Boeing Aust. was once a Defence Minister who handed Boeing a $7bn contract against departmental wishes.

The world, OUR world is facing catastrophic climate change and the workers at Boeing are designing and building aircraft and systems for war crimes, not for good.

Boeing is out of control. Their business does not make the world safer. It makes it pointlessly hi-tech, and explicitly more dangerous. 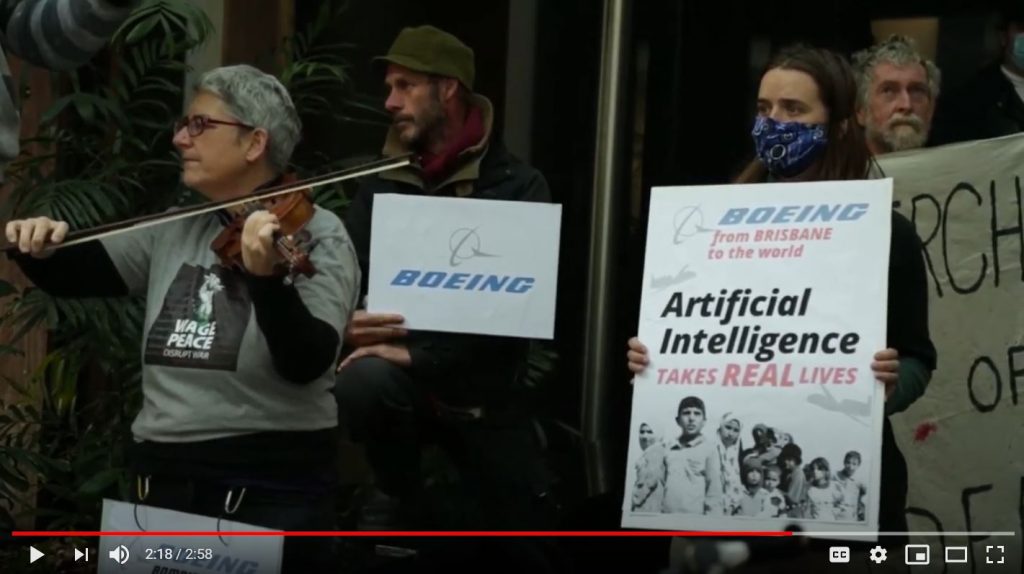 Boeing aircraft and technology are used for war crimes around the world. For example,

Boeing is selling direct to the dictator Duterte for use against his own people.
A Boeing helicopter was used to fire the missiles in the leaked “collateral murder” video.
Boeing guidance systems were used to destroy civilian infrastructure in Yemen.

The new drone is competing to be the preferred “wingman” drone chosen by the US for its failing, expensive Lockheed Martin F-35 fighter jet. The drone’s AI (Artificial Intelligence) is likely to involve lethal use – taking humanity out of the loop for killing.  Here’s Boeing’s take on this:

“…Boeing is driving the safe innovation and integration of autonomy to maximize human potential”.

Loyal Wingman is ‘not remotely piloted’. It’s autonomous. It’s supposed to ‘help both manned and unmanned mid-air.’ But, reading between the lines, it is related to lethal combat: a Lethal Autonomous Weapons System [LAWS].

Where is the conversation about ethics in the public domain or academic sphere? Are universities now businesses doing work for the weapons industry? It appears that, for these workers, it’s just hi-tech, interesting intellectual, decentralised, problem solving. But artificial intelligence takes real lives.

And with the US central to the decision making, we can be sure that Australian money is flowing to US corporations.

QUOTE FROM SAFEGROUND REPORT ON KILLER ROBOTS “Australian Out of the Loop”
‘Alarmingly, …[Australian defence have assured] options to invest in ‘autonomous combat aircraft.'[1] In January 2020, Defence announced the ‘Loyal Wingman’ project. In a partnership with Boeing, 3 prototypes of fully autonomous aircraft are to be built[2].This sees Australia skirting this troubling fine line.The government will contribute AU$40 million to ‘Loyal Wingman’[3].The project clearly constitutes part of the plan stated in the Force Structure Review Plan, that “new and existing aircraft will combine with remotely piloted and autonomous systems to provide increased lethality and survivability.”[4] ‘

Here are some banner designs for you to make your own action. 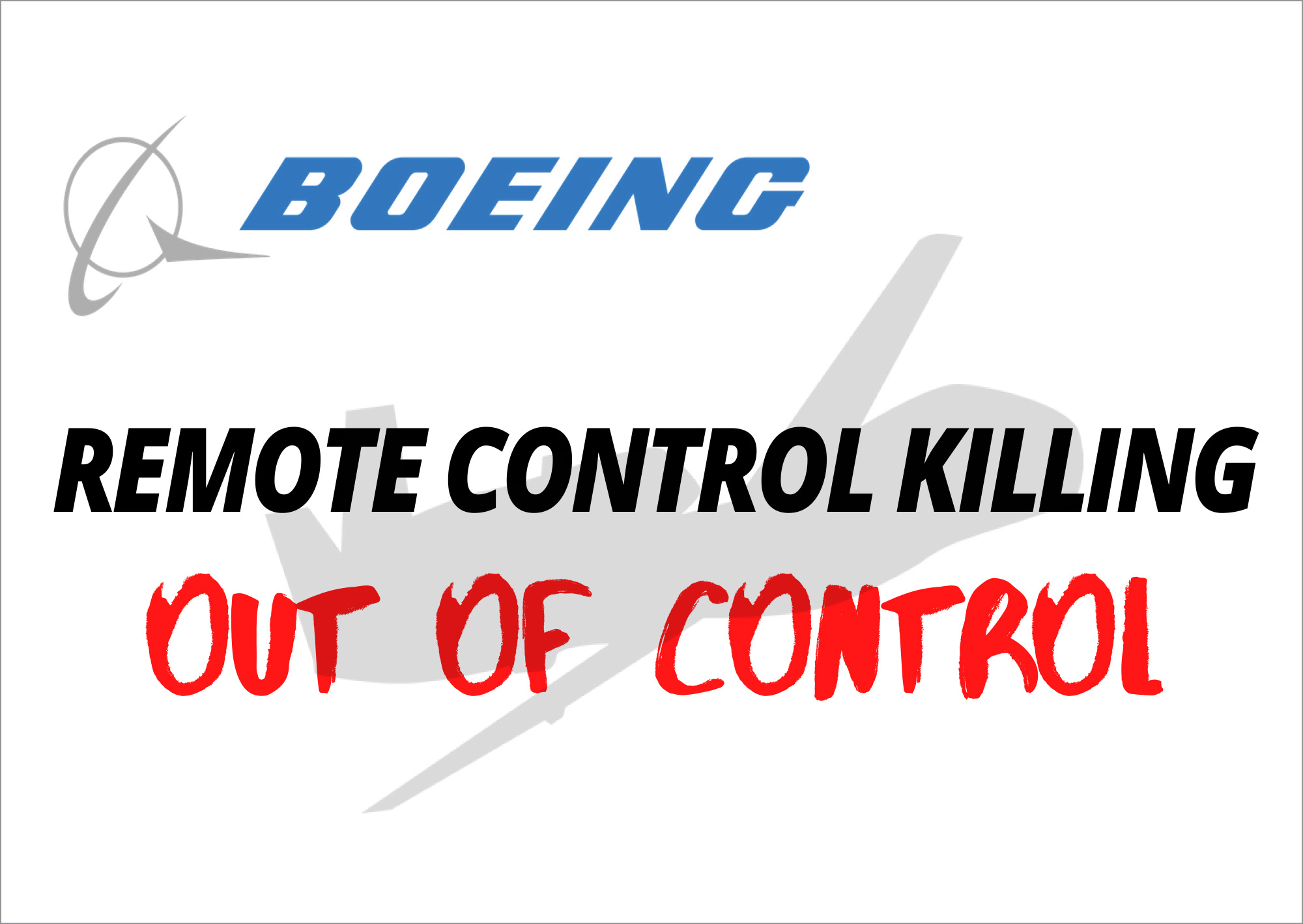 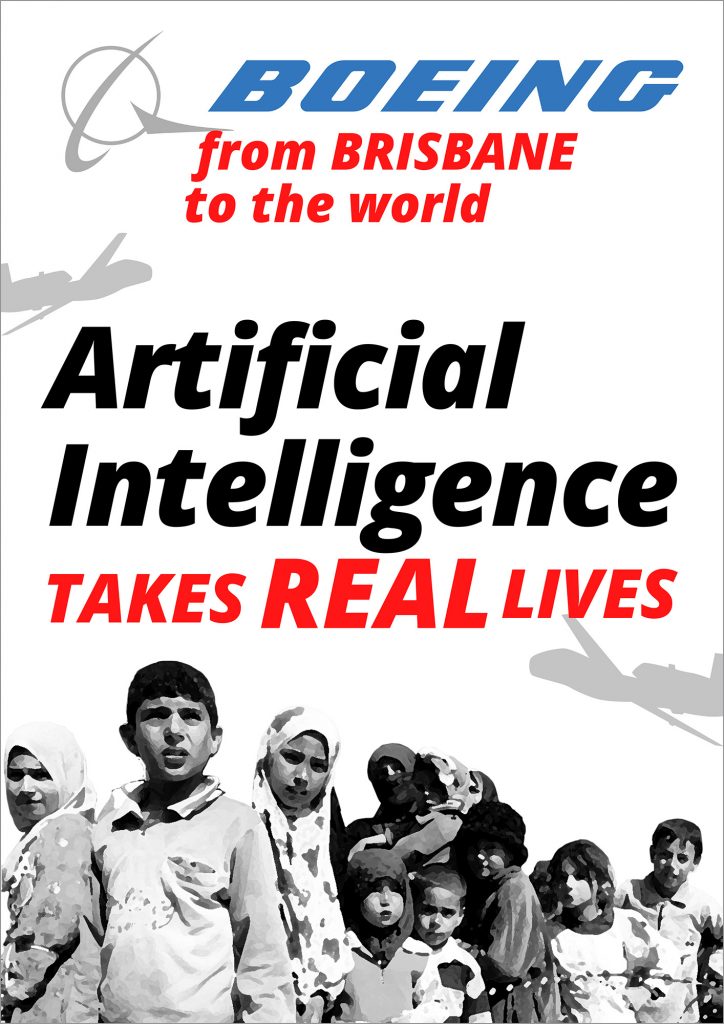 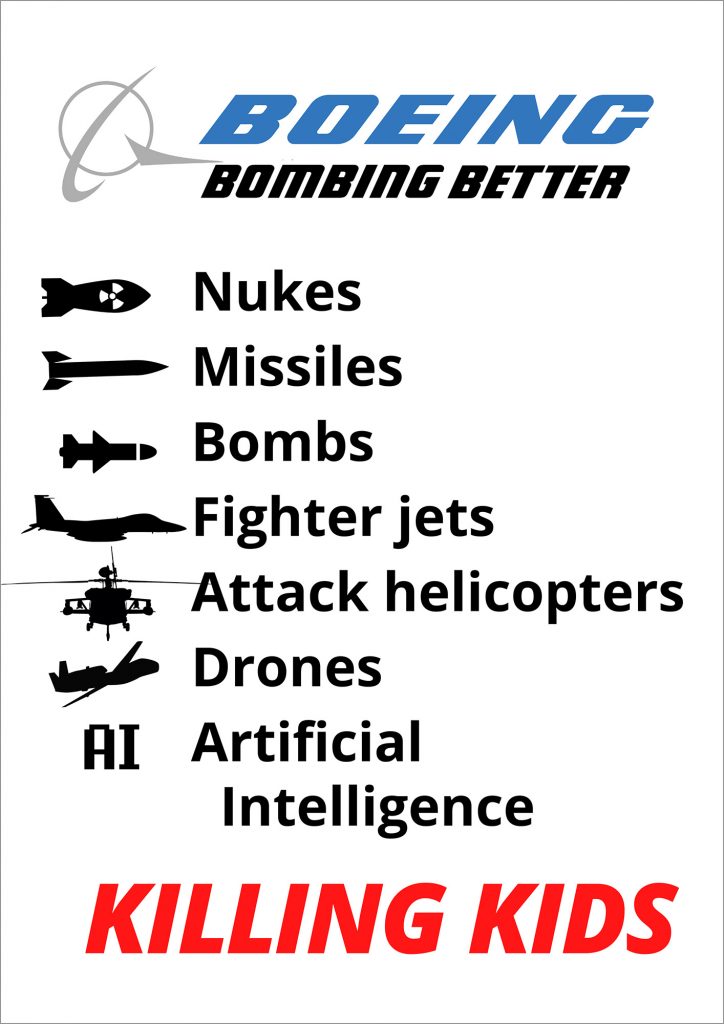 Text of the Performance Poem

Boeing is out of control!  [repeat]

Boeing is out of control!

We are here today because Boeing engineers death [repeat all]

Death is at the core of Boeing’s business

We are here today because Boeing builds aircraft for war crimes.

The attack helicopter that delivered the missiles /

which killed journalists and children in the ‘Collateral Murder’ video – /

Civilian infrastructure was destroyed in Yemen,

using guidance systems made by Boeing

We are here today because Boeing profits from war and violence.

We are here today because Boeing is building weaponised drones in Brisbane.

Drones have killed hundreds of children; and thousands of civilians.

Boeing is building drones with artificial intelligence for lethal use.

Boeing is taking humanity out of the loop.

We are here today because Boeing is a US company siphoning money out of Australia.

Boeing coerces our parliament, to prop-up its business with cash

The growth of domestic weapons industries comes at the cost of human lives.