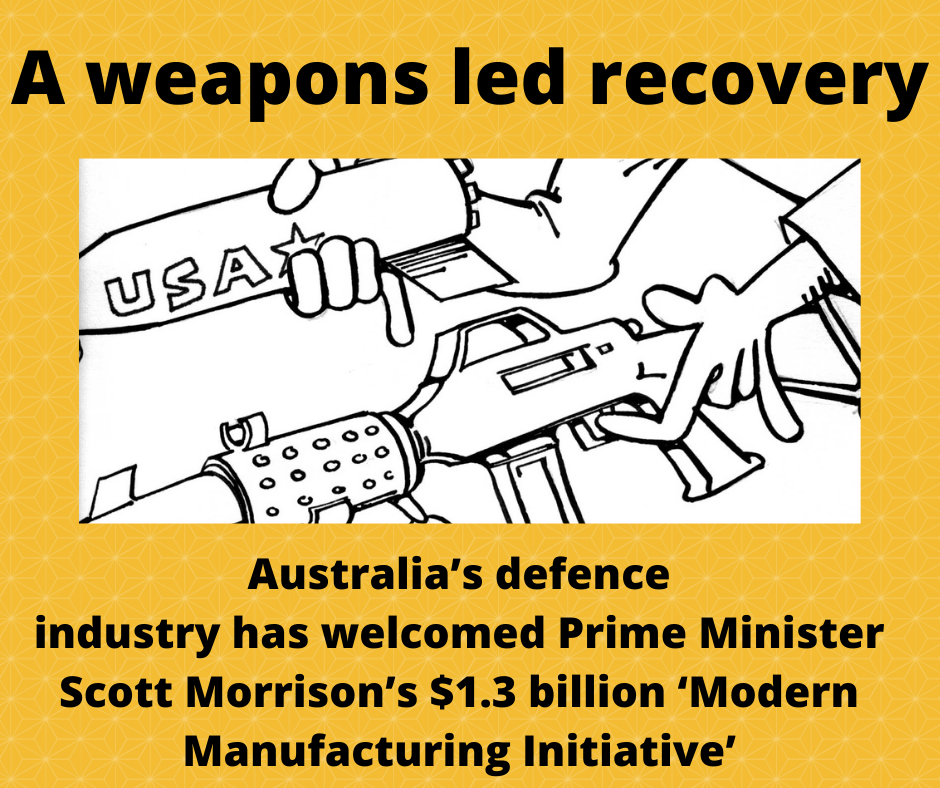 Frydenberg’s 2020-21 budget confirms a profligate spend on Australia’s military capabilities that is unjustifiable from every view point: strategic, economic, environmental and social.

The addition of a further $3 billion to the already allocated $42.2billion for 2020-21 will see Australia acquire a military capability grossly disproportionate to its defence needs. The planned capability will work less as a deterrent to adversaries and more as provocation and destabiliser, undermining national security. It also undermines security by diverting money from priority areas such as health and the environment.

“The military budget is one place where we can afford to cut our expenditure as we face no enemies and are not under any threat of direct or indirect attack by any state.  Instead the Government has caved in to the pressure from US and European arms corporations and decided to spend on weaponry like there is no tomorrow” said Denis Doherty from the Anti-Bases Campaign Coalition.

“The Treasurer promised us a budget ‘all about jobs’”, said Mr Doherty. “What in fact his budget does is propose very inefficient, uncertain and expensive means to generate jobs, and the military component of the budget exemplifies this.”

In 2017, US researches compared the number of jobs created by the investment of $1 million in various sectors: for every $1 million spent on defence, 6.9 jobs were created. The same amount invested in health care produced 14.3 jobs and in clean energy 9.8 jobs.

The Australian Government plans to spend $45 billion on defence. If ten per cent of that amount were transferred to healthcare, something like 64,000 jobs could be created in our struggling health care system and, in addition, we could be better equipped to combat the pandemic. If another ten per cent went to clean energy, we’d have about 45,000 jobs and could help address the nation’s major security problem, the environmental crisis.

“Australia’s limited resources would clearly be better spent on shoring up our health system than it would on upgrading military hardware.

“Australian taxpayers may ask if spending more than A$80 billion on 12 new submarines, which security specialists say will be out of date before they are delivered, is a sensible use of scarce resources when there are more immediate and compelling threats to our community,” Mr Doherty said.

“Where is the massive public housing spend? Where is the major health initiative? Where are the environmental protection measures?

“The Morrison Government’s budget has delivered a massive setback to the people of Australia which will make us poorer but not safer or healthier,” Denis Doherty concluded.

Budget a setback for Australia and the region, Australian Anti-Bases Campaign Coalition