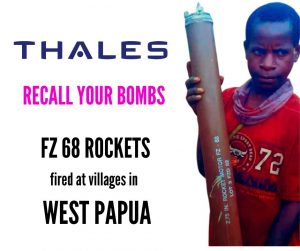 On Friday 11 November, at 11am, activists in Narrm / Melbourne observed 1 minute of silence for those murdered in war – INSIDE THE SECURITY FOYER OF AN ARMS DEALER!!! We had managed to take our entire entourage, with banners, placards, a viola, amplifier and 2 replica bombs right into the security screening room of Thales in the ‘World Trade Centre’ on the banks of the Birrarung or Yarra river. The replicas were of FZ68 rockets, manufactured by Thales in Belgium, fired at West Papuan villages in 2021. [Read more] Peace In Papua – Thales, recall your bombs 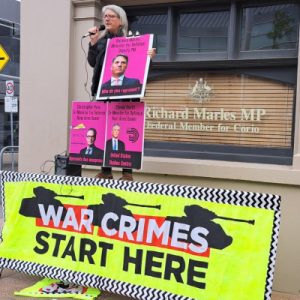 n early November 2022, we visited Richard Marles’ office to question the operations of the weapons industry. We wanted to show that ordinary people find the weapons industry  unacceptable. Our disapproval is such that we are willing to attend publicly, with some effort, and make some noise.

Marles is currently Minister of Defence. His predecessors – the previous Defence Ministers – have very close relationships with the weapons industry. Three of the previous five defence ministers have ended up in significant executive roles leading or advising weapons corporations after leaving parliament. Beazley, Nelson and Pyne moved very quickly to leadership positions with Lockheed Martin, Boeing, Elbit and Nioa.

The main argument: The Defence Industry has gained undue influence in the education sector particularly with regard to STEM education. Their intentions  are outlined in their 2019-2030 Workforce Strategic Vision and the Defence Industry Skilling and STEM Strategy. These documents reveal an explicit intention to steer students toward careers in the defence industry. Other relevant… [Read more] Demilitarise Education – Campaign Background Briefing 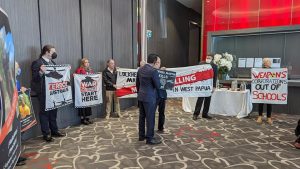 On the 15th of August 2022, the Emporium Hotel in Meanjin (Brisbane) was just putting the final touches on their Magnolia room. The staff had spent the previous night setting up tables, chairs, and stunning floral center pieces. They wanted everything to look good for their client. The client, and the organiser of the event… [Read more] Interrupting the Pipeline: Defence in STEM 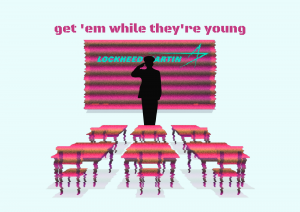 Militarism in our culture is not something that we think about often. When we don’t think about something, we don’t talk about it. When no one is talking about something, it has space to move around without anyone noticing or scrutinizing what it’s doing. Recent rising tensions with China have caused some people to start… [Read more] The military has invaded our classrooms.