There’s no honour in exporting abuse.

Soldiers of the United Arab Emirates have conducted human rights abuses in Yemen. Australians from the SAS have been training them. And defence technology contracts are embedded in the training arrangements.

Many have already signed the petition to stop Australian #DefenceExports to governments that abuse. If you have signed, we ask that you SHARE it again now to your friends while this issue is alive.

Australians involved are from a #toxicSAS, accused of abusing people in Afghanistan. They are not only training “special forces” in UAE, but also in Indonesia, the Philippines and probably Cambodia. Sometimes it’s government to government [Indonesia]; sometimes via recruitment agency to dictatorship [UAE]. What does it mean to be ‘special’ forces anyway? Are they special because they are trained to abuse?

There is no honour in abuse or in weapons deals.
Abuse is abuse.

The weapons arrangements are facilitated by close relationships. The generals of the failed Afghanistan war are, at best, turning a blind eye or, at worst, facilitating with meetings and assistance. Other generals are turning up on the boards of the arms dealers. Gen. Peter Leahy is on the board of Electro Optic Systems the Australian Stock Exchange listed weapons company nominated in the ABC articles. The generals use the authority they hold in relation to the #toxicSAS ‘trainers’ to push weapons into nations which, in turn, are abusing vulnerable people. First Nations people are always in most danger because it’s their land that is coveted: West Papua, Marawi, Yemen.

A false sense of being “honourable” binds them and bolsters them. Yet they are steeped in dishonour. ‘Honour’ facilitates their arms deals and self-centred career moves.

The Generals team up with [ex] politicians such as WA Labor’s Kate Lundy, on the board of the Australian weapons company EOS, or Kim Beazley – previously of Lockheed Martin Australia – now Governor WA. By being Labor, they make the corruption solidly #bipartisan.

Gen. Angus Campbell, Chief of Defence has relationships with these people: with Gen. Hindmarsh in UAE, Gen. Leahy at the weapons company EOS, former SAS officer turned MP Andrew Hastie and Ben Roberts-Smith. They are his peers. They are #NotHeroes.

And there are facilitating bureaucrats Pezzullo, the architect of Border Force who has been shepherding these arrangements since his involvement with Beazley in the 90s.

We need you to clarify and simplify the ABC story and keep it in front of people who may be moved to action.

Hashtags can clarify and simplify and link

#toxicSAS – to evoke the stories about the human rights abuses of the SAS.
#notDefence – to link to other pointless mega-projects [#scraptheF35] and challenge the notion that ‘defence’ budgets are untouchable. It’s not about ‘defence’, it’s usually about money, mates or self interest.
#notHeroes – to challenge the propaganda that these men are heroes.
#transparency – to link with the ‘transparency’ movement – people like Michael West trying to shed light on bureaucratic black holes.
#revolvingDoor – to highlight the way individuals move from politician, to lobbyist or from defence to defence acquisition managing tenders, to corporation project management and back to defence.
#WarProfiteers – to link with the global arms trade movement
#MakeWestPapuaSafe – to link to the specific campaign highlighting the use of AFP and#toxicSAS in training Kopassus against First Nations people.
#DefenceExports and #ArmsTreaty  – are used by the international human rights network campaigning for control of weapons sales.

Happy and safe Christmas.
Yours in peace, see you next year on the streets 🙂
Margaret Pestorius
for #WagePeace 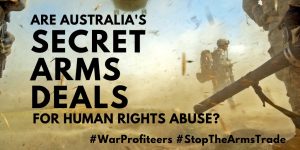 Those of us working on the project are around the country and we invite you to play/volunteer with us. or donate!