Will you prepare to stand with us in at Landforces in Brisbane, June 2021?

The weapons industry in Brisbane is rapidly developing.

Being onsite gives us ordinary folk concrete information. We encounter real people going about their everyday preparation for … war crimes. 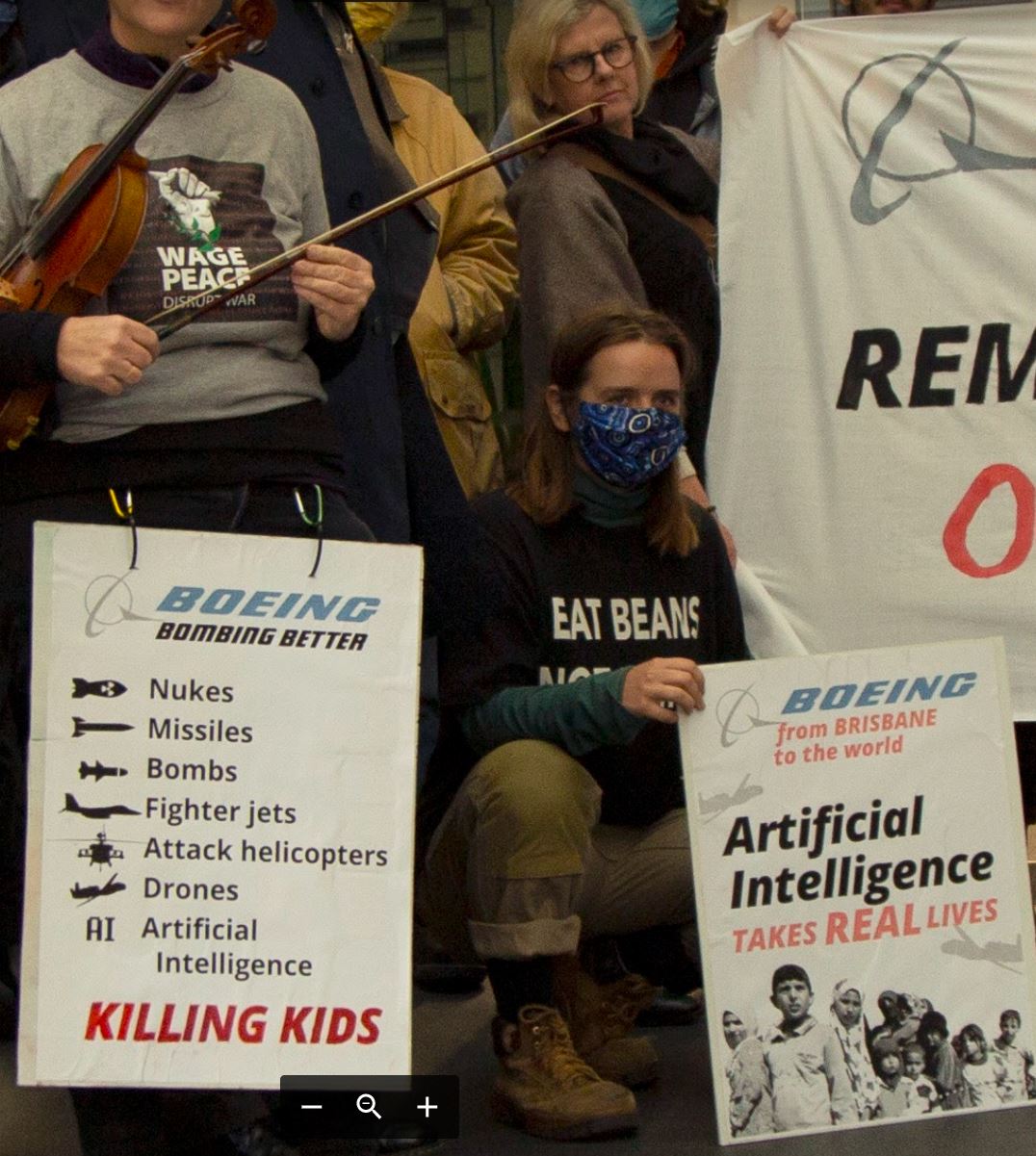 Boeing build ‘aircraft for war crimes’.  There’s the list above.

We went to Boeing with the message that Boeing is ‘Out of Control’.

Rheinmetall is another of eight ‘PRIME’ contractors involved in the Global Supply Chain Program. There’s a prize if you can list them. Is Saab in or out? Leidos?

In Germany, our friends at Rheinmetall Entwaffnen [‘Disarm Rheinmetall’] conducted a weekend of actions against Rheinmetall in Kassel Germany where they make tanks and ammunition. Activists blocked two factories for 3 days.

We visited Rheinmetall in Brisbane in solidarity with the German actions. It is an immense facility on some of the last free river land in Brisbane representing further militarisation of Indigenous lands.

Watch our video to hear the story of Rheinmetall in Australia 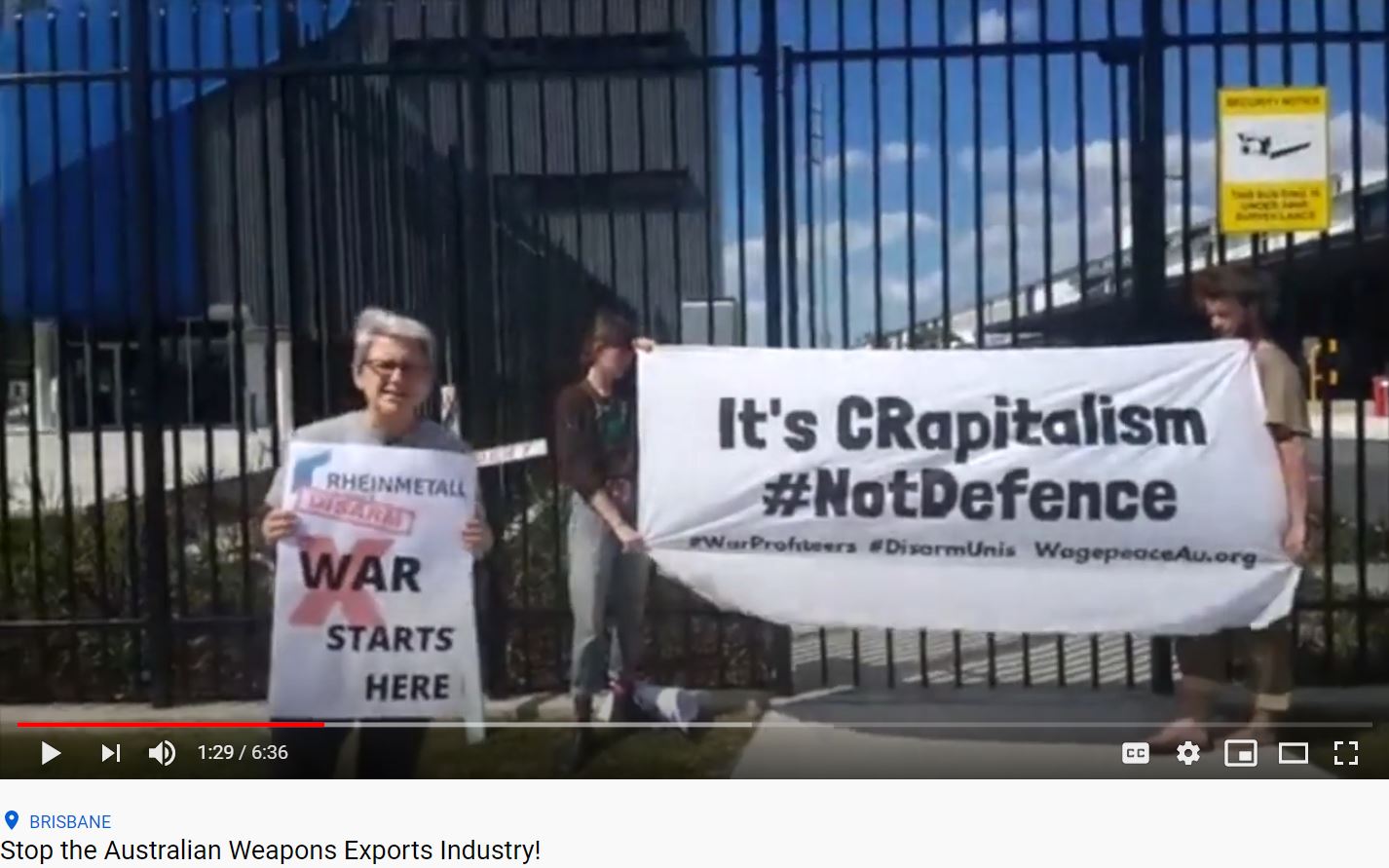 Rheinmetall’s weapons business takes money and support from both tiers of government.

Rheinmetall have their Military Vehicles Centre of Excellence (MILVEHCOE) – in the suburb of Redbank. You may have seen the PM riding in a tank there last week. MILVEHCOE sounds like a glorified mechanic’s pit-stop but it is a weapons dealership facilitating “additional builds and design programs”.  They assemble weaponised vehicles and make munitions all the while searching for ‘markets’ (read communities of ordinary people) where their weapons and ammunition can be used.

A major concern for the German activists are Rheinmetall’s weapons transfers to Turkey which is initiating dangerous airstrikes in Kurdistan.

But our focus is Indonesia. Rheinmetall are already trading weapons to Indonesia which will NOT #MakeWestPapuaSafe. We see Indonesia buying weapons and using those weapons on their own people in law enforcement and military contexts. Indonesia is involved in distinct and increasing human rights abuses in West Papua.

Rheinmetall will be a big player at the LANDFORCES 2021 weapons trade event in Brisbane in June where everyone will be #makingakilling.

NIOA with Rheinmetall – a team making ammunition for war crimes.

Where would the PM go next? Thinking we might catch the media associated with a prime-ministerial visit, we visited Nioa which has teamed with Rheinmetall to take money from the people of Queensland. Nioa was set up by Robert Nioa in the 1970s for the manufacture of ammunition for “sport” but they have … expanded.

Watch our video at Nioa, on Lomandra Drive near the BITA at Pinkenba 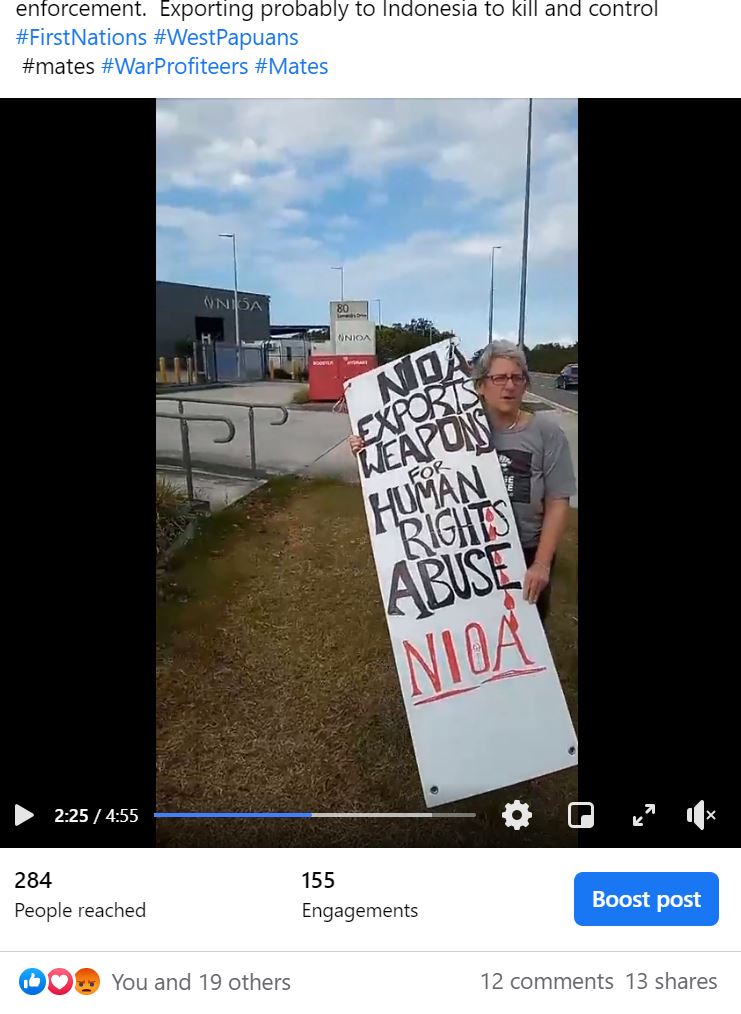 NIOA are also beneficiaries of the Global Supply Chain Program.

(Interestingly, Mr Nioa is married to Bob Katter’s daughter Eliza who is a major financial supporter of the Katter Party). We presume these exports will go to

We must never stop exposing the weapons’ companies interest in promoting violent conflicts to sell their products. Truly they are #WarProfiteers.

You are our friends, colleagues and followers. You are the people MOST INTERESTED IN the RISE of MILITARISM in Australia.

We need you to actively work with us in making plans to disrupt this militarism at every point. We need you with us when we take action. We need new forms of action beyond social media. It is not enough to know what is going on.

Will you prepare to stand with us at Landforces 2021?

Boeing is trying to sell attack helicopters to Australia now. Rheinmetall is fixing arrangements with Indonesia. They will be pushing for contracts and dealing with dictators at Landforces 2021 a massive land-weapons trade event in Brisbane in June 2021. They will be joined at Landforces by our old friends EOS who are also exporting in the region.

Join us as we organise toward Landforces 2021. Are you interested in being on our core team for Landforces?

Which targets would be best? We’d love to hear your thoughts.

Margie and Miriam, Zelda, Cate and the team.