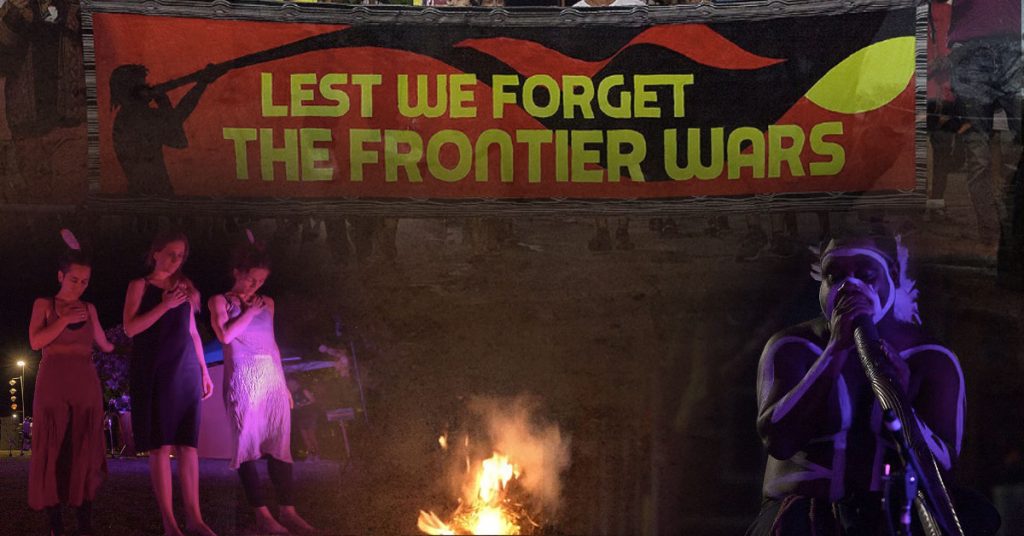 The old people who lived and died during the Frontier Wars, truly gave their lives to protect their families and the beautiful Land which they had lived with and told stories about for thousands of generations.

It’s 250 years since the British first invaded. They made no treaties. The white settlers warred upon the first peoples and stole their land.

Gimuy Wallubara Yidindji and non-indigenous people who live on their land have been commemorating the Frontier Wars in Cairns for the past 5 years.

Nowra based florist Hazel Davies has been active in getting the Desert Pea recognised as the native blood-on-the-Earth equivalent of the Flanders Poppy.

She has been teaching Desert Pea wreath making and conducting wreath laying ceremonies at the Australian War Memorial and elsewhere.

In this year of contagion, we move on line – and we ask YOU to participate wherever you are.

Lest We Forget the Frontier Wars.

Register here to make a contribution live on Zoom
https://zoom.us/meeting/register/tJUucOuqqD4pEtURHeI2ryOmpy5kY-49xJ3R

The Zoom session will show you a Frontier story from a previous ceremony.

Other stories will be available on the Facebook Event Page. You might have a Frontier Wars story to add.

Bring a response that express ‘lament” – a personal sorry story, a poem or a small live performance. We will show 4 or 5 of the offerings and put the other ones on line.