Concerned citizens took a disruptive performance to four Canberra sites to highlight how Canberra supports the transfer of Australian weapons, made by Electro Optic Systems (EOS), to the Kingdom of Saudi Arabia and United Arab Emirates (UAE).

On Nov 13th the group visited

The group performed a theatrical procession revealing war crimes in action, “Extra Lethal”, featuring a Saudi General, a weapons executive and of course – victims of war.

The CEO Ben Greene previously admitted the company has plans for  future shipments to the Kingdom of Saudi. Furthermore, in a media release dated January 30, 2018 Greene claimed that the EOS R400 weapons system is all about “considerably enhancing lethality”.

EOS has sent weapons systems to the Saudi Ministry of Interior, even after the killing of journalist Jamal Khashoggi as indicated by this shipment noted at Sydney airport in June 2019. 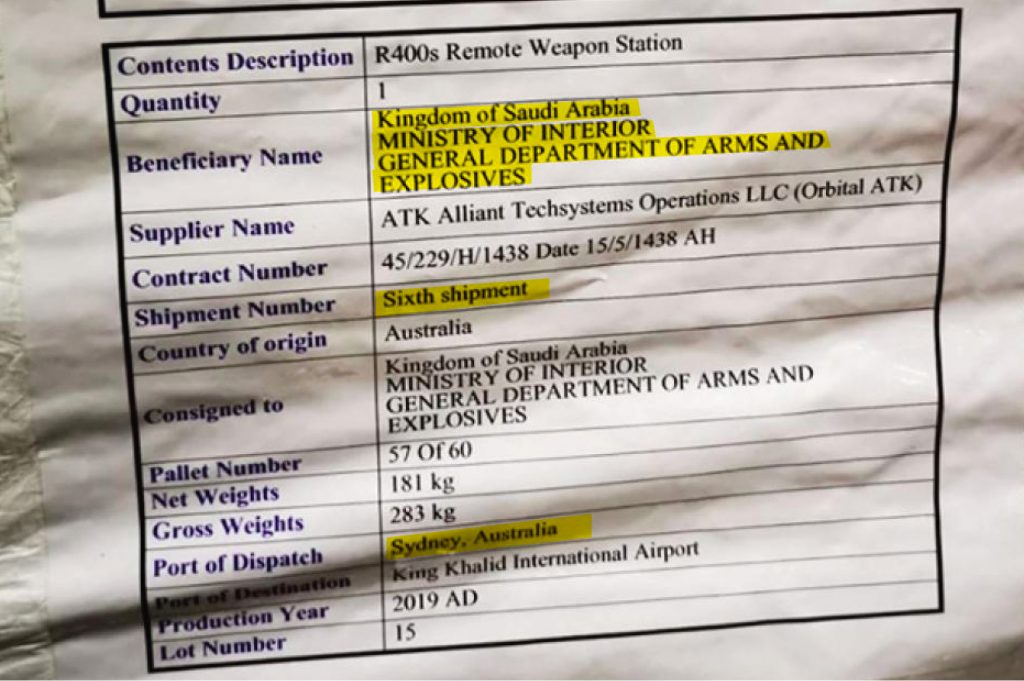 Shipping label showing R400s Remote Weapon Station exported to the Kingdom of Saudi Arabia, Minister for Interior, General Department of Arms and Explosives via Orbital ATK.Shahnaz Martin from Wage Peace said “The board is stacked with Canberra identities such as Kate Lundy and General Peter Leahy: people embedded in Canberra society pretending to do good, but doing deals with dictators”.

“We say EOS enhances the lethality of Saudi war crimes in Yemen. We fear the Kingdom of Saudi Arabia are using weapons against their own population including women struggling for human rights and other dissidents such as journalists.” said Ms Martin

“This company’s interest is simply about money with total disregard for the victims of the regime. The last thing the Middle East need are more weapons. If EOS are mercenary with this particular technology, we must also question if their so-called civilian space program is also a military scam.”

“We simply don’t believe them when they say they don’t send weapons to Saudi – Who ever believed a arms dealer. They appear to have slipped round the Arms Trade Treaty”.

This letter was sent to shareholders in response to the media coverage and protests. It does not actually say that EOS does not sell to Saudi Arabia and UAE, rather it says that they sell to allies of the US and Australia, since US and Australia have a good human rights record. It is obviously a false assumption given the human rights abuses in Yemen. It is up to companies to make the moral decision.

At least 9 nations have already stopped transfers of weapons to Saudi Arabia including Germany, Denmark, Finland, Belgium and the UK. UK were forced to stop selling by their High Court.

EMAIL THE CEO OF THE WEAPONS COMPANY DIRECT