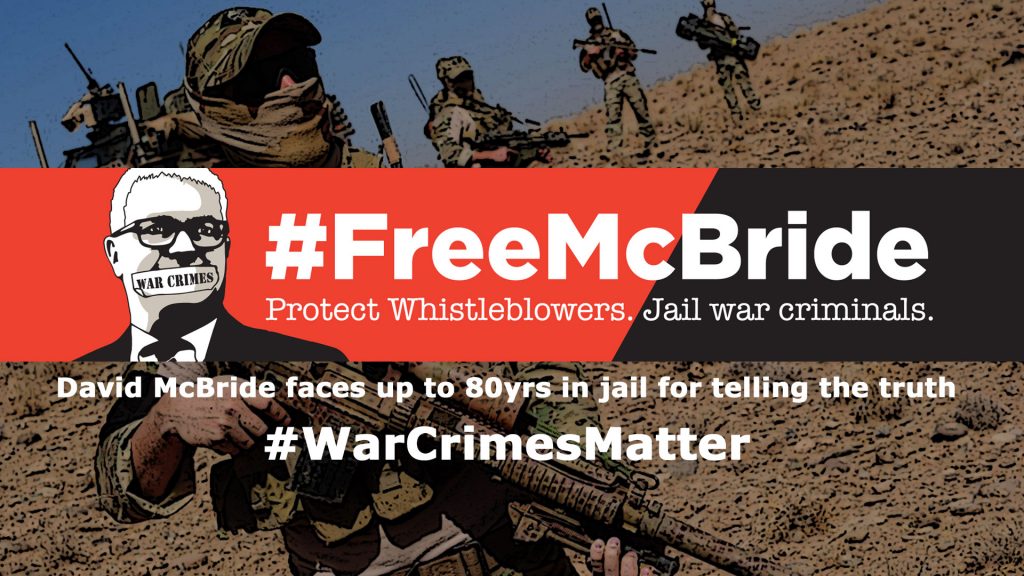 Whistleblower David McBride is facing five national security-related charges, carrying up to life imprisonment, for leaking information to the ABC.

Independent MP Andrew Wilkie last week put a motion in Parliament noting that military lawyer David had been warning Defence about command failings and about the conduct of the war in Afghanistan since 2014. When no effective action was taken, Major McBride provided information to the ABC which raised the alarm on the matters before us in the Brereton report, and subsequently he was arrested. Wilkie’s motion further called for all charges against Major McBride to be dropped. The information he had provided to the ABC formed the basis of the “Afghan Files” broadcast in July 2017.

The Hansard of last Monday, November 30, provides Wilkie’s explanatory speech on why these charges should not continue, referencing also whistleblowers Witness K and Richard Boyle as well as the cases of Julian Assange and lawyer Bernard Collaery. Both the government and Labor voted against debating the motion. This is a shameful situation.

Attorney-General Christian Porter gave the explanation that the separation of powers requires that the government not interfere in judicial matters and that it is the responsibility of the Commonwealth Director of Public Prosecutions (CDPP) to decide whether or not to proceed with prosecutions. However, he didn’t acknowledge that the Attorney-General’s consent was required for the prosecutions of Witness K and Bernard Collaery to take place under the National Security Information Act (NSIA), a situation that is not required for most criminal cases.

Porter also gave no explanation as to why the issue of the leaking of information on possible war crimes in Afghanistan had sat before George Brandis for years and no action was taken on the prosecution. Why then did Porter, or, he would have us believe, the CDPP, suddenly decide in September 2018 that Major McBride should be charged? Especially as the case does not appear to meet the CDPP criteria for prosecution.

While generally Porter’s justification would have validity, and non-interference by government in judicial affairs is a strong and fundamental principle of democracy, there are powers that can be used if a miscarriage of justice is seen to be done. Section 71 of the Judiciary Act (1903) gives the Attorney-General those powers.

It is testament to our strong judicial system that those powers have not had to be used, but it does not mean they should never be used. Major McBride’s case, as well as those of Witness K and Bernard Collaery (whose actions led to the Australian government’s bugging of the Timor-Leste government offices being exposed) and Richard Boyle (ATO whistleblower) are clear instances where the injustice of the prosecutions is strong and is clear justification for the powers to be used.

The prosecution of these whistleblowers does the government no credit as they are acting in the public interest, not for any gain for themselves. They are people of integrity and should be lauded for their actions.

It is no coincidence that this government is refusing to implement a strong Commonwealth independent commission against corruption. It is also no coincidence that it is cutting funds to the National Audit Office and the ABC, institutions fundamental to our democracy that have identified serious deficiencies in proper spending accountability and other areas of administration by the government. So it is perhaps no surprise that the government is punishing whistleblowers so severely.

In this situation of lack of accountability, it is crucial that whistleblowers are encouraged to bring wrongdoings to public notice. In some other countries – for example, the US and South Korea – there are rewards for whistleblowers who provide information leading to prosecutions. A royal commission into the adverse treatment of the whistleblowers referred to here, and of others, and into the effective legislative protections and possible rewards needed for them, should be urgently instituted.

Kathryn Kelly is co-convener of the Coalition of Supporters of Bernard Collaery and Witness K.

First published in THE CANBERRA TIMES December 8 2020. Used with permission of the author.