Lockheed Martin is by far the largest weapons producer in the world. From Ukraine to Yemen, from Palestine to Colombia, from Somalia to Syria, from Afghanistan to West Papua, no one profits more from war and bloodshed than Lockheed Martin.

Lockheed Martin’s revenue from arms deals in 2020 was USD $65 billion. It’s an unbelievable amount of money based on an horrific amount of harm to our planet and her peoples. 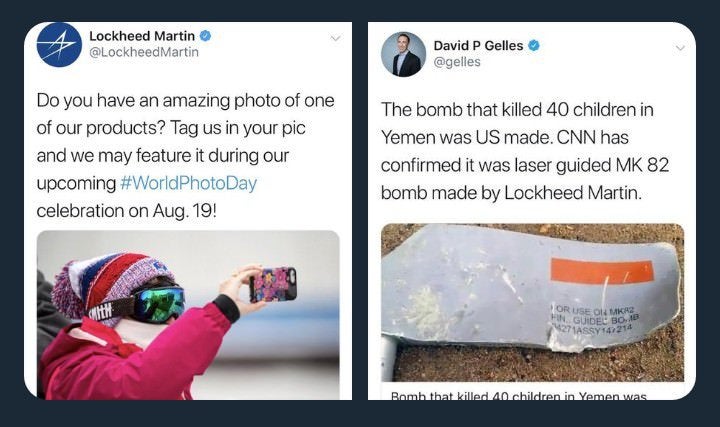 We call on people around the world to join our Global Mobilization to #StopLockheedMartin on April 28, the same day that Lockheed Martin holds its Annual General Meeting.

Individuals and organizations everywhere: take action in your towns and cities, in whatever ways you can, to join this campaign push to GIVE LOCKHEED MARTIN A REALLY BAD DAY. Wherever Lockheed Martin produces weapons or profits from violence we will mobilize to #StopLockheedMartin.

Lockheed Martin weapons are a mainstay of the Indonesian military occupation of West Papua. Lockheed has sold dozens of F16 fighter jets – which cost USD $85 million each – to Indonesia’s airforce, along with several C130 troop transporters. Australia gave 4 Lockheed Martin C130s to Indonesia and sold a further 5 at a discounted rate. These military aircraft are regularly seen transporting combat units into West Papua’s highland regions, where soldiers patrol, occupy and terrify indigenous Papuans. Along with military aircraft, Lockheed Martin sells Hellfire Missiles to Indonesia, which can be fired from helicopters, boats and tanks. Most missile attacks in West Papua occur in the highlands. As these weapons blow up on impact it is rare that a missile can be identified, however it is very likely that Lockheed Martin missiles have been used in West Papua.