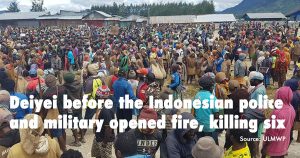 West Papuans are currently engaged in a full-scale, nationwide, nonviolent insurrection. They demand all Indonesian troops to be withdrawn and for the internet to be switched on. The conflict is not going away until the question of political self-determination is settled in a free, fair and dignified way, either through political negotiations and/or a referendum.… [Read more] West Papua is Rising Up: Act now with Papuans to #MakeWestPapuaSafe