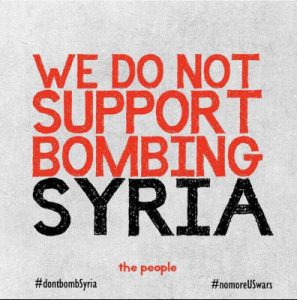 “Clearly reject the proposed missile attack and instead be a voice of reason in calling for all non-military means possible to be adopted to resolve the conflict.”

Tweet @MarisePayne #dontbombsyria : “reject the proposed missile attack and be a voice of reason in calling for all non-military means possible to be adopted to resolve the conflict.”

Call on the Labor party to act responsibly @RichardMarlesMP [Twitter] is the Shadow Defence Minister.

Bombing not the answer for peace in Syria, rather a dangerous mistake

Australian Foreign Minister Julie Bishop’s reckless support for a military strike by the US in Syria demonstrates Australia’s lack of independence in its foreign policy.

IPAN spokesperson Mr Stephen Darley said, “Surely it is clear that any military exchange between Russian and US forces threatens a dangerous widening of the conflict and the lives of millions.

The Organisation for the Prohibition of Chemical Weapons has accepted an invitation from the Syrian government to inspect the region where an alleged chemical weapon attack occurred demonstrating a willingness to support its claim they had not conducted such an attack.

The video showing children being hosed down allegedly from a chemical weapons attack needs to be investigated.  Any chemical attack is an inhumane and illegal act, requiring the strongest condemnation.

If there is proof that chemical weapons have been used in Syria, regardless of who was behind it, then there needs to be serious consequences in the international court of justice where crimes against humanity are legitimately dealt with.

What is clear is that a bombing assault on sites in Syria is neither legal, effective or acceptable. The risks of even more innocent people suffering death, injury and destruction of homes and the risk that a major powers war could ensue is being recognised internationally.

Mr Darley is calling on the Foreign Minister and the Prime Minister to clearly reject the proposed missile attack and instead be a voice of reason in calling for all non-military means possible to be adopted to resolve the conflict.