During seven days of creative, ingenious, staunch, peaceful, collaborative actions, over three hundred people spoke truth to the power of the war makers at Brisbane’s Land Forces weapons expo. Our Festival of Resistance unfolded in a whirlwind of humanity discovering itself, as we supported each other to take risks, make art, experiment and disrupt the military industrial death machine that is wrecking our planet and her peoples. There was rage, there was grief and there were moments of despair, but above all, growing by the day, there was joy. As we took action together to Disrupt Land Forces, as we planned and played together at our base in Jagera Hall, something extraordinary and alchemical happened. Solidarity transcended ideology or intellect or politics and became, simply, love. It was exquisite. There was a buzz running through our collective spaces; we were all high on the magic of our making. The community we created over those seven days provided a glimpse of the future we hold in our hearts and it is magnificent.

Thanks but no tanks

Disrupt Land Forces got off to a spectacular start on May 27 with a tank blockade action disrupting the bump in at Brisbane Convention Centre – a day before the Festival of Resistance’s planned launch. Two of us happened to be in the neighbourhood when a Rheinmetall Unarmed Combat Warrior and a Ripley cannon mount came rolling around the corner headed for the loading dock. And … go! The sugar glider spirit was with us as two of us ran, jumped and climbed onto the moving weapons and quickly messaged the rest of us. We ran! Within a few minutes fifty of us had surrounded the weapons and one person had locked on to the Ripley machine. Within an hour, a hundred of us were dancing in the street. After four hours of disruption to the weapons industry, four of us were arrested and all of us were elated with the people power we had raised together. It was a glorious start.

On May 28 we held our planned launch event, lighting solidarity fires simultaneously at the Brisbane Sovereign Aboriginal Embassy in Musgrave Park and in the highlands of West Papua. Aunty Karen, Yuggera elder, had proposed lighting the fires to echo the distress fires that people in times past have sent to warn each other of the incursions of police and soldiers in these lands. Karen’s idea was to connect us in Kurilpa (aka South Brisbane) with our friends in West Papua, to signal that we recognise their distress and to pledge our support. We would connect the fires via zoom, in a fantastical merging of ancient and contemporary communications methods. We never thought in a million years that we could make it happen. What with Indonesia throttling the internet in West Papua, the vagaries of weather and the difficulties of even routine contact with people in West Papua, the vision seemed almost impossible to bring to life. To our astonishment, the vision became reality. The Zoom connections were made, the fires were lit and there we were inside a breathtaking communion of First Nations peoples sharing stories and expressing solidarity. By firelight. And by Zoom. We were launched.

The solidarity grew as we explored tactics, exchanged ideas and planned together through our workshops on Saturday 29, and was amplified through dance during Saturday night’s concert. Sunday morning, May 30, one hundred of us were on the doorstep of two weapons companies in the heart of Brisbane’s (literal) military-industrial complex in Redbank: Rheinmetall and DB Schenker. The police didn’t like our poles, but they didn’t seem to mind that the street signs now read “Fascist Way” and “War Crimes Drive” – references to the millions made by Rheinmetall and DB Schenker from the persecution and murder of Jewish people under Nazism. Sunday night we disrupted the bump in for a second time, with a Grim Reaper figure atop a ‘Sensitive Cargo’ truck and a solid circle of arms around the base. Uncle Kevin Buzzacott gave a memorable speech calling for the wisdom of the elders to be heeded: “We know the way home”. The truck-jumpers and arms-linkers held up bump in for hours. Monday we visited SkyBorne (killer drone manufacturers) and Thales (exporters to Indonesian Special Forces Kopassus), where two of us were arrested to the sweet sounds of Black Brothers performed by Uncle George and Aunty Irene Demarra. Tuesday June 1, the opening of the Land Forces expo, we created a cacophony. This really was a carnival of chaos, with slippery blood spills blocking one entrance, the Quakers for Peace blocking another and total aural and visual mayhem going on at the third. It was a long, hard walk into the Convention Centre for the war makers that day. Our Vuvuzelas (plastic horns), our Cazerolazo (banging pots and pans), our rape whistles and our voices were all at fever pitch. We set out to make the Land Forces participants uncomfortable. We succeeded.

All ages, all cultures, all genders

The creativity, once unleashed, became a raging torrent. We are stunned, thrilled and just incredibly impressed by all the ways people took action, and by the spirit of radical respect people extended to each other throughout the Festival of Resistance. (Radical respect = accepting and allowing divergent styles of protest even when, or especially when, we find them hard to understand.) This respect for difference was empowering and enabled a vast range of people to participate in ways they found meaningful. Tuesday saw Butoh Hauntings, hardcore heckling, a citizen’s arrest of Christopher Pyne – again, invoking the spirit of the Sugar Glider with a stunning leap onto a moving car – poetry, story telling and a deeply moving ‘Say Their Names’ ceremony for the children recently killed in Gaza. On Wednesday the Quaker Grannies set up a 24 hour vigil, Climate Angels shed blood on the threshold, twenty of us stormed the expo and climbed onto a tank (hi Rheinmetall! It’s us again!) and a raucous, theatrical ‘Dinner of Death’ parade ruined the schmooze fest of the war makers down at South Bank. We were having fun. Thursday June 3 kicked off with a singing installation at the main entrance and at midday, exhausted after seven days of actions, we still had energy for a dance party to smash the patriarchy.

The solidarity is strong with this one

We have to talk about the kitchen. Thrown together, last minute, no budget, no resources, still the kitchen served us two plentiful, tasty, nutritious meals a day, on time, with smiles, with hugs even. Our kitchen and our logistics team were beyond science; they may have created a breach in the time-space continuum. Our minds were blown. Not only did the kitchen feed us and the logistics team equip us every day, they did so in multiple locations (e.g. at the barricades, the solidarity fire, the watch house) without skipping a beat. Brisbane locals are off the charts for solidarity.  The hospitality of our Brisbane people extended to supreme street medicine, legal observing and to rock solid watch house and court support. We highly recommend Brisbane as a place to hold a week long Festival of Resistance. Brisbane folks are up for anything, and can do everything. To all our Brisbane people, we heart you very much. ❤

37 of us were arrested

while standing up (and sitting in) for humanity. Inside the building, the planners and facilitators of crimes against humanity plied their killing trade. Outside the building Queensland police arrested us for actions such as: blowing a whistle, sitting on the ground, tweeting, performing Butoh, sugar gliding, holding a wok and dancing. None of us used violence, none of us manufactured or sold weapons that will maim human beings and decimate the biosphere. 37 of us will face court. The war criminals were protected by hundreds of police to carry on their ‘legitimate business’ of exporting terror. 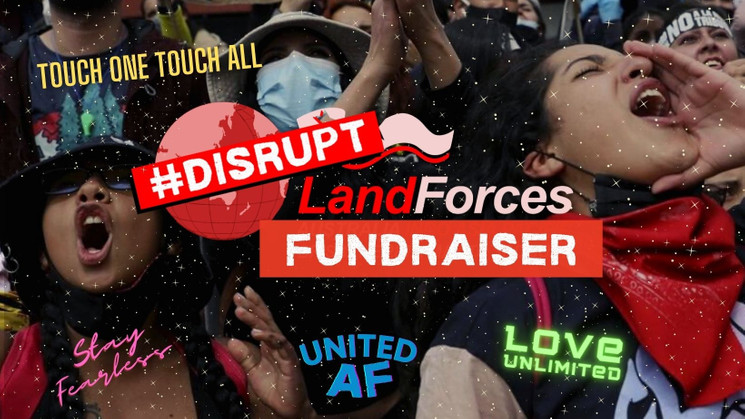 We will never stop

The people who came together to Disrupt Land Forces were empowered and elated by the experience. We came away inspired and buoyed by the love and solidarity that flowed in from around the world. We will not stop resisting until the oppression has ended and we are travelling together on the path of healing our planet and her peoples. Click here to kick in for our legal costs to show you stand with us. Stay with us for more beautiful actions for peace and justice in a city or forest near you.