West Papuans are currently engaged in a full-scale, nationwide, nonviolent insurrection. They demand all Indonesian troops to be withdrawn and for the internet to be switched on.

The conflict is not going away until the question of political self-determination is settled in a free, fair and dignified way, either through political negotiations and/or a referendum. West Papuan leaders also want the Indonesian government to immediately release all political prisoners arrested for calling for self-determination. They are urging the international community to pay attention to what is happening and for the Indonesian government to allow a visit from the United Nations High Commissioner for Human Rights.

Thank you so much for your solidarity with West Papua.

Please share the news on social media, sign and share our petition, and, if you are able to, demonstrate outside AFP offices or  Indonesian embassies and consulates on Friday 6th of September.

Since 21 of August, tens, and possibly hundreds, of thousands of West Papuans have poured into the streets, calling for an end to the Indonesian government’s occupation of West Papua.

The event that sparked the latest uprising were attacks from the Indonesian police, military, and a racist mob, towards West Papuan students in Surabaya, Malang and Semarang in Java.

In Surabaya, students were called ‘monkeys’, ‘dogs’ and ‘pigs’, including by police and military personnel. The crowd, who came from civil-society mass-based organisations, threw stones and threatened ‘to kick the students out’ and ‘slaughter them’. Australian and US trained police then stormed the dormitory in riot gear and arrested 43 students, wounding many of the students in the process. 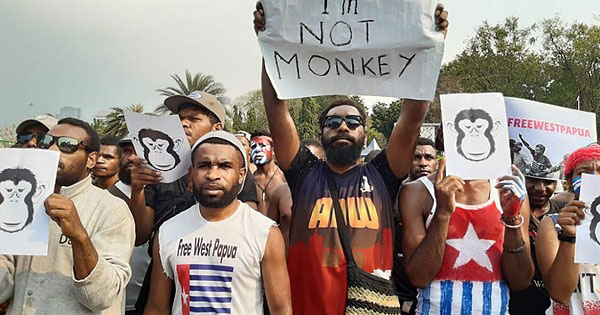 The reason for these attacks? In Malang and Semarang, it was because students marched and called for freedom. In Surabaya it was because an Indonesian flag had been allegedly thrown in the gutter.

The racist slurs, a daily indignation for all West Papuans, and something we witness/experience regularly, have ignited a firestorm. In Jayapura, thousands shut down the capital of West Papua. The Governor of West Papua, Lukas Enembe, cried tears of frustration.

In almost every town and district across West Papua people have taken to the streets. Tens of thousands of people have rallied and raised the banned Morning Star flag. In these places Papuans behaved in a disciplined and dignified way, resolutely committed to nonviolence.

Most of this has not been reported in the mainstream media. Even in places like Manokwari, Sorong and Fak-Fak, where riots broke out, Papuans did not attack anyone and there has been no retaliations against Indonesians. Everywhere Papuans are displaying the banned Morning Star. In acts of risky defiance, it has been raised on flag poles outside Government offices in West Papua and even outside the Presidential Palace in Jakarta. In Sorong, in a stunning act of noncooperation, the Red and White, the Indonesian flag, was lowered by civil servants and handed back to Indonesians. 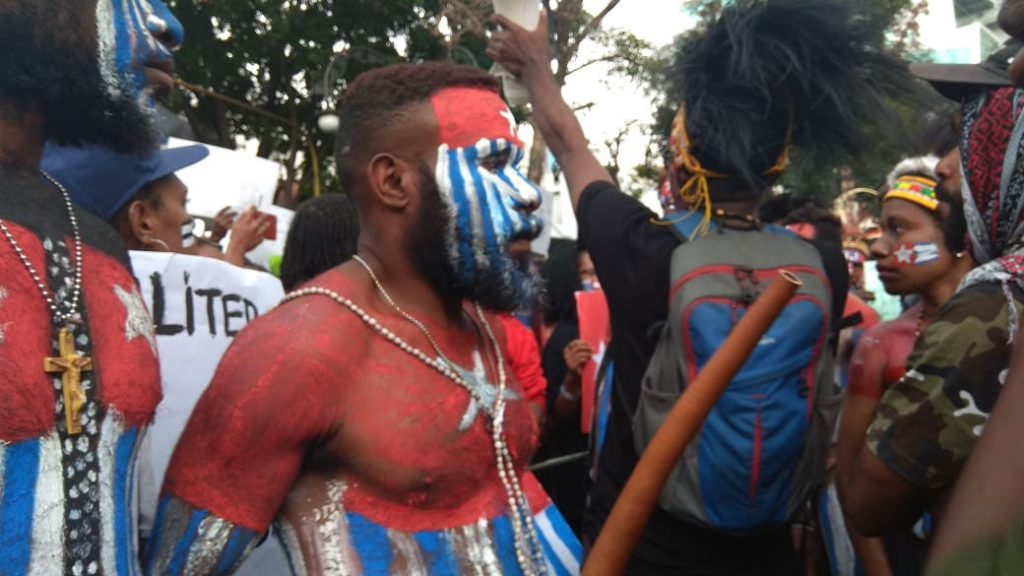 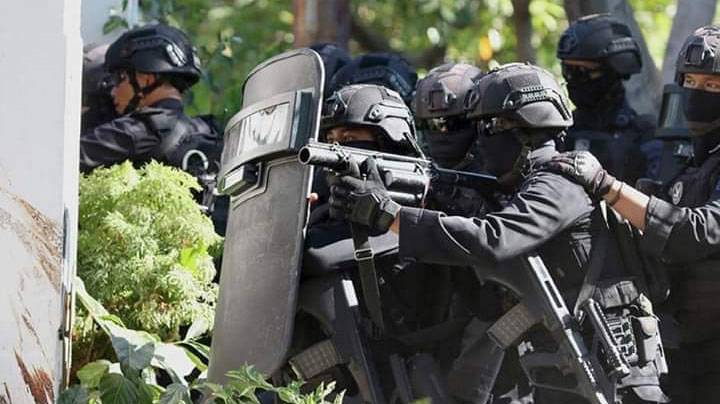 The refrain, heard on the streets and spread electronically, over and over again, is ‘Indonesia treats like animals, it is better if we are just free’. West Papuan students, together with Indonesian solidarity activists from FRI-West Papua (Front Rakyat Indonesia untuk West Papua) have protested across the archipelago. In Papua New Guinea, East Timor, and around the Pacific, people are standing in solidarity, stating clearly that when West Papuans are called monkeys by the state they also call Pacific Islanders monkeys.

Instead of prosecuting the organisers of the mob and the police who raided the student dormitory in Surabaya, the Indonesian government sent in troops to West Papua and throttled the internet.

Essential services, including local government and hospitals, have been affected by the government’s internet blockade. Doctors have been unable to access patient records, research cases, or order medicines. This is not only a freedom of expression issue; the Indonesian government is showing it disregards West Papuans’ basic rights to life and safety.

Thousands of Indonesian combat troops have arrived by air and sea. Scores of Papuans, including mothers, have also been wounded by Indonesian police and military as civil insurrection spreads. Many of our friends, well known activists as well as people on the street for the first time, have gone into hiding.

On the 28th of August the Indonesian military and police in Deiyei taunted protesters who had gathered outside local government offices. Again they abused Papuans as ‘monkeys’. Then, when people responded angrily, the security forces opened fire, killing six. Police and military have since denied the attack, surrounded the hospital in Deiyei, in the remote highlands, and prevented everyone from visiting the wounded or viewing the bodies of those killed.

The day after, Thursday 29th of August, West Papuans marched 50km on foot, from Sentani to Jayapura. As we write this, one of us holed up in a safe house with good independent WiFi. Outside Jayapura is in flames. A parliament building is in flames. Indonesian militia are on the street and West Papuans are still occupying the downtown area. With West Papuan leaders and the Governor of Papua in Jakarta negotiating with the President it is not clear what is going to happen in West Papua, over 3000km away at the eastern end of Indonesia’s far-flung archipelago.

Meanwhile in Nduga military operations that began in December last year continue. Refugees are still arriving in the towns or hiding in the forest as the remote mountain villages empty.

What you can do 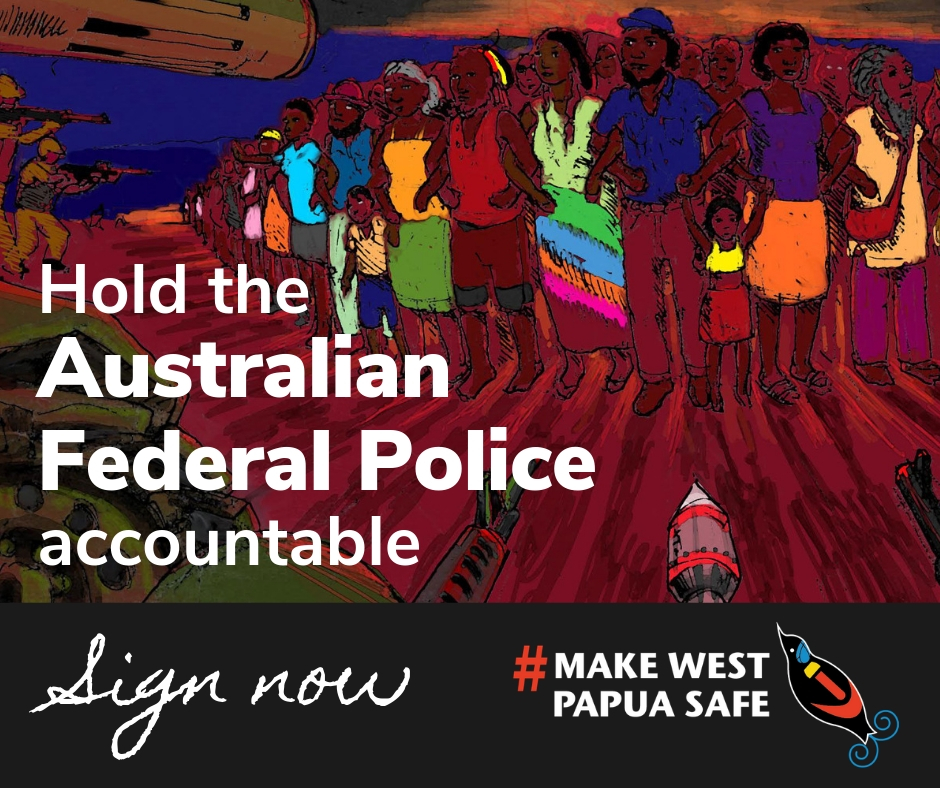 “West Papua, the people of the world are with you!” 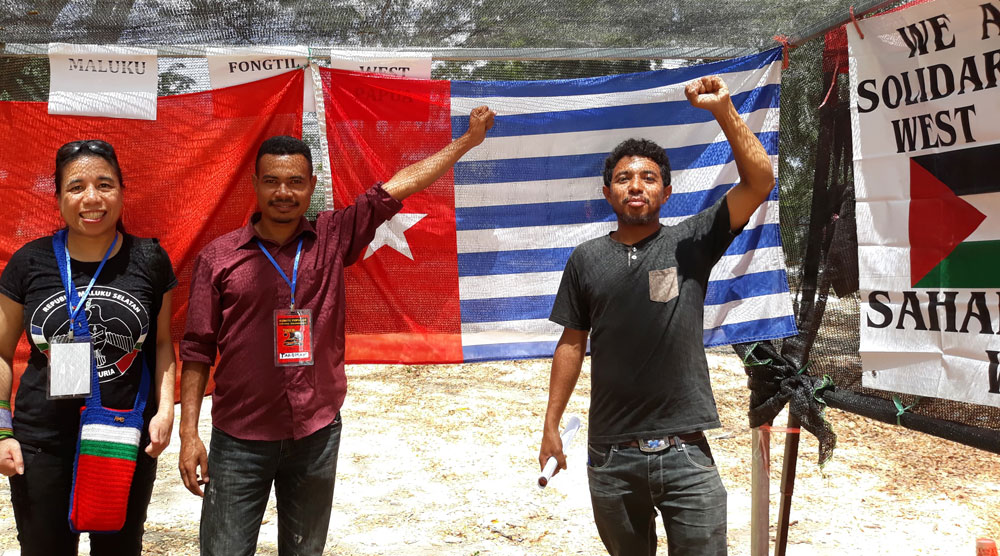 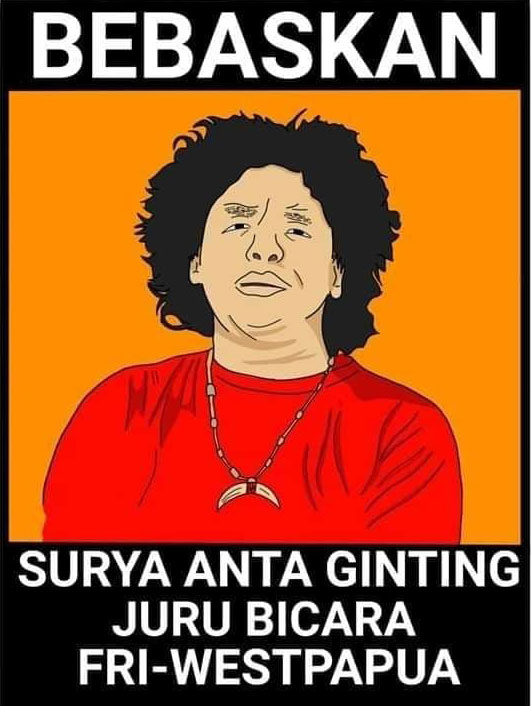